2.The English edition bases itselfmainly on the Chinese edition of China Agri-culture Yearbook 2016.The compilation isunder the auspices of the Ministry of Agricul-ture and from the assistance of various minis-tries and state departments concerned.Thedata of the statistics of agricultural economyare from the National Bureau of Statistics,Ministry of Agriculture,State Forestry Ad-ministration,Ministry of Water ResourcesChina Meteorological Administration and General Administration of Customs,etc. The English edition of this Yearbookdoes not include the information fromHongkong,Macao,and Taiwan Province ofChina unless specially stated.

Beijing Statistical Yearbook is a large statistical book published continuously on a chronological basis. With a great deal of statistical data, this Yearbook gives a true reflection of the social and economic development and changes in Beijing over the past year. It serves as an important reference book for domestic and foreign personnel in all circles to understand and know Beijing.

Symbols in statistical tables include:

#: means that the item is included in the total. Grouped indicators marked with “#” are part of the total, while those without“#” mean that sum of inclded items equals to the total.

||: means that there are multiple ways of grouping the indicators.

…: means that the figure is less than the minimum measurement unit of the table.

Blank: mean that the figure is unknown or unavailable.

***: means that the figure is not disclosed for secrecy reasons.

Explanations include User Guide, Table of Contents, Brief Introduction, Explanatory Notes to Main Statistical Indicators and notes under the tables. User Guide appears before the Table of Contents, giving an introduction to the overall framework of this Yearbook, and explaining the main adjustments; Brief Introduction appears on the first page of each chapter, giving an introduction to the chapter’s main content, source of data, statistical scope, standards of indicators, adjustment method of historical data, etc; Notes under the statistical tables make an explanation on standard of some indicators, method and scope, etc.

Beijing Statistical Yearbook is provided with a CD-ROM, which containes Chinese and English versions of this Yearbook. The CD-ROM helps users in working with and processing the data.

(VI) The sum of some statistics or some relative numbers in this Yearbook might have certain calculation errors because of the choice of different units of measurement. All the statistics have not undergone mechanical adjustment.

Compared with 2016 Beijing Statistical Yearbook, the following adjustments have been mainly made: 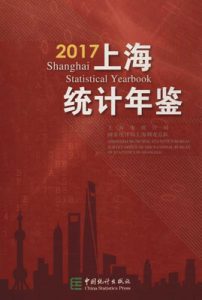 Ⅰ.Shanghai Statistical Yearbook 2017 contains comprehensive statistics of Shanghai’s social and economic development in 2016 and selected data of some important years and of the period since China adopted the policy of reform and opening to the outside world. Ⅱ.The book is composed of 23 parts viz.1.General Survey;2.Population;3.Employment and Wages;4.National Economic Accounting;5.Fiscal Revenue and Expenditure;6.Energy and Environment Protection;7.Investment in Fixed Assets;8.Foreign Economic Relations,Trade and Tourism;9.Prices;10.Living Standards;11.Urban Construction;12.Agriculture;13.Industry;14.Construction;15.Transportation,Posts and Information Transmission;16.Wholesale and Retail,Hotels and Catering Services;17.Finance;18.Real Estate;19.Science and Technology;20.Education;21.Health,Social Security and Social Welfare;22.Culture,Sports;23.Laws,Notary and others.In order to make readers using materials correctly,brief introduction and explanations of major statistical indicators are attached after every chapter. Ⅲ.Main part of the data in this yearbook are investigated and collected by Shanghai Municipal Statistical Bureau and Survey Office of the National Bureau of Statistics in Shanghai,except those with special notes. Ⅳ.The international standard unit of measurement is applied in this book.All amounts are denominated in RMB,except those with special notes. Ⅴ.The prices used for calculating of gross indicators in this yearbook are current prices. Ⅵ.Statistical discrepancies in this book due to rounding are not adjusted. Ⅶ.Marks in this book:…means not large enough to be rounded into the least unit of measurement;blank space means data are not available;#indicates major item in a category. Ⅷ.Previous editions of Shanghai Statistical Yearbook have won wide acclaim among the readers.In order to get further improvement in the yearbook editing,we welcome all candid comments and criticism from our readers.

Ⅰ.Hunan Statistical Yearbook-2017 is an annual statistical publication, which reflects comprehensively the economic and social development of Hunan. It covers data for 2016 and key statistical data in some historically important years at provincial level and local levels of cities, prefecture and counties.

Ⅲ. In comparison with Hunan Statistical Yearbook-2016, following revisions have been made in this new version in terms of the statistical contents and in editing: Cut the main economic and social statistics indicators by provinces, municipalities and autonomous regions table；Starting from the 2016 annual report, the research and development expenditure accounting method reform, and corresponding to the 2004 GDP historical data has been revised; In Chapter 15, the Basic Information on the new enterprise innovation table, the entrepreneur’s understanding of innovation and the relevant situation table、the overall situation of large-scale Industrial enterprises Innovation activities table；In Chapter 20, the main economic indicators of enterprises above designated size are deleted；adjust the Situation according to the professional and departmental report,relevant statistics are increased or adjusted to enrich relative statistical indicators in different degree.

Ⅵ. Figures in Government Work Report, and the communiqué are preliminary statistics.

Ⅶ. Notations used in the yearbook: “#” indicates the major items of the total; “(blank)” indicates that data are not available or the figure is not large enough to be measured with the smallest unit in the table.

Ⅷ. Based on our limited level, perhaps there are some mistakes in the book, we welcome all candid comments and criticism from our readers.

This Yearbook of High Technology Industry is based on the High Technology Industry (Manufacturing Industry) Classification, which has been published by the National Bureau of Statistics in 2013. The purposes of the Yearbook are to summarize the development and international competitive position of China’s hi-tech industry and to facilitate the goals of the state macro administration in formulating policy and programming in support of China’s hi-tech industry.

The Yearbook describes the development of China’s hi-tech industry during the period from 2000 to 2015.  Statistical series for the years 2000 to 2016 include production, R&D and related activities, investment on fixed assets, and relative international comparative measures of this fast-growing industry. The Yearbook should serve as a useful source for the public planning and administration sector as well as the broader business and research communities for understanding recent developments in China’s hi-tech industry.

The Yearbook contains five parts. The first part focuses on the production and management of hi-tech industry. The second part of the Yearbook focuses on R&D activities, new products development, patents, technology acquisition and technology reconstruction, and R&D institutions in hi-tech enterprises. The third part focuses on investment on fixed assets in hi-tech industry. The fourth part of the Yearbook focuses on international comparisons of different countries based on the World Bank data. The fifth part is appendix information, including High Technology Industry (Manufacturing Industry) Classification(2013), catalogue of Hi-Technology Industry (Manufacturing Industry) Classifications, Published Format for Sorting-out the Statistical Data of High-Technology Industry (Manufacturing Industry) and Main Statistical Indicators.

The data of High-Technology Industry (Manufacturing Industry) for the year 2016 in the Yearbook include Manufacture of Electronic Chemicals data, but historical data are not adjusted retroactively. Notations used in this book:“(blank space)”indicates that the figure is not large enough to be measured with the smallest unit in the table or data are unknown or are not available. Statistical discrepancies due to rounding are not adjusted in the yearbook. Eastern region include Beijing, Tianjin, Hebei, Shanghai, Jiangsu, Zhejiang, Fujian, Shandong, Guangdong and Hainan. Middle region include Shanxi, Anhui, Jiangxi, Henan, Hubei and Hunan. Western region include Inner Mongolia, Guangxi, Chongqing, Sichuan, Guizhou, Yunnan, Tibet, Shaanxi, Gansu, Qinghai, Ningxia and Xinjiang. Northeastern region include Liaoning, Jilin and Heilongjiang.